On November 2, 1949—70 years ago—the Hope-Princeton Highway was officially opened, providing a new and long-awaited direct car and truck route between the Lower Mainland and the southern Interior. The new highway was important for commerce, but also played a  critical role in the postwar development of automotive tourism in the province. The BC government travelogue Peachtime in the Valley (1949-1951) promoted the Hope-Princeton as a route to the Penticton Peach Festival.

This episode of the CHEK-TV/Royal BC Museum series This Week in History looks at the highway, the opening, and the film that promoted it.

Map showing the Hope-Princeton (in black) as part of the Southern Trans-Provincial Highway.

Visitors pause for photos at “Ye Olde Manning Park Gallows” on the Hope-Princeton Highway, 1957. (BC Archives photo I-28674, detail.) 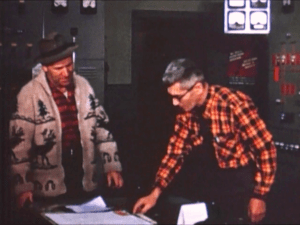